Town insignia, once established for a city, just like its name - is there to stay. The town proudly displays its insignia on its major offices, halls and roofs as well as documents. Since medieval times, the insignia has been the sign of self-government and the town’s showcase. The town seal, which is over 500 years old, displays a strutting stag with a forest in the background. The reference to abundant game in the surrounding woods remains true even today. 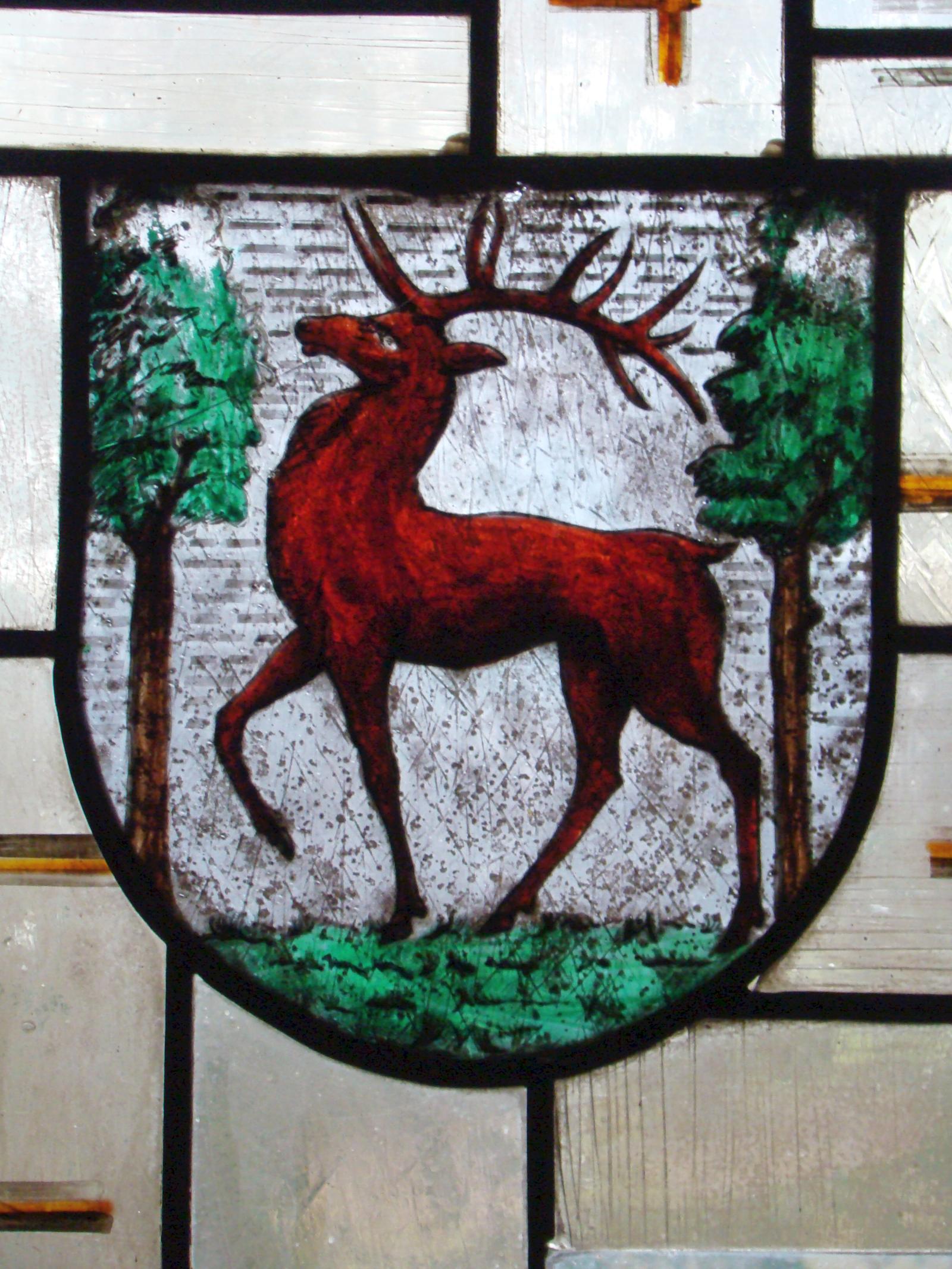 I. The most characteristic location on Wojska Polskiego Street is the Złotów Land Museum. The museum is located in a historical, timber framed burgher tenement building from the 18th century. It houses documents with numerous insignia and seals of Złotów. It also preserves the Złotów town insignia in the form of a stained glass fragment from the District Governor’s Office window. The museum houses a collection of archeological, ethnographical, historical and other exhibits which document the history of Złotów.

In search of the next town insignia, we head out to Kościuszko Square. We walk past Paderewski Square - on the corner of the tenement house, there is a plaque devoted to the piano player and prime minister of the newly reborn Republic of Poland. The square marks the location of a synagogue built in 1878-1879 and destroyed in 1938. On the way to the next town insignia, we encounter even more curious finds! Afterwards, we head west and continue (24 m) straight on and walk along (100 m) Dworzaczka Street (formerly a Jewish street - Judenstrasse). Next, we head straight on (67 m), through Kościuszki Square and, with a look to the left, we see the former Evangelical church of Stanisław Kostka, the patron saint of young people. The three-aisle hall church was designed by a Prussian architect, Karl Friedrich Schinkel. The front of the building is decorated with a unique bossage, and the church tower stands tall over the town landscape. 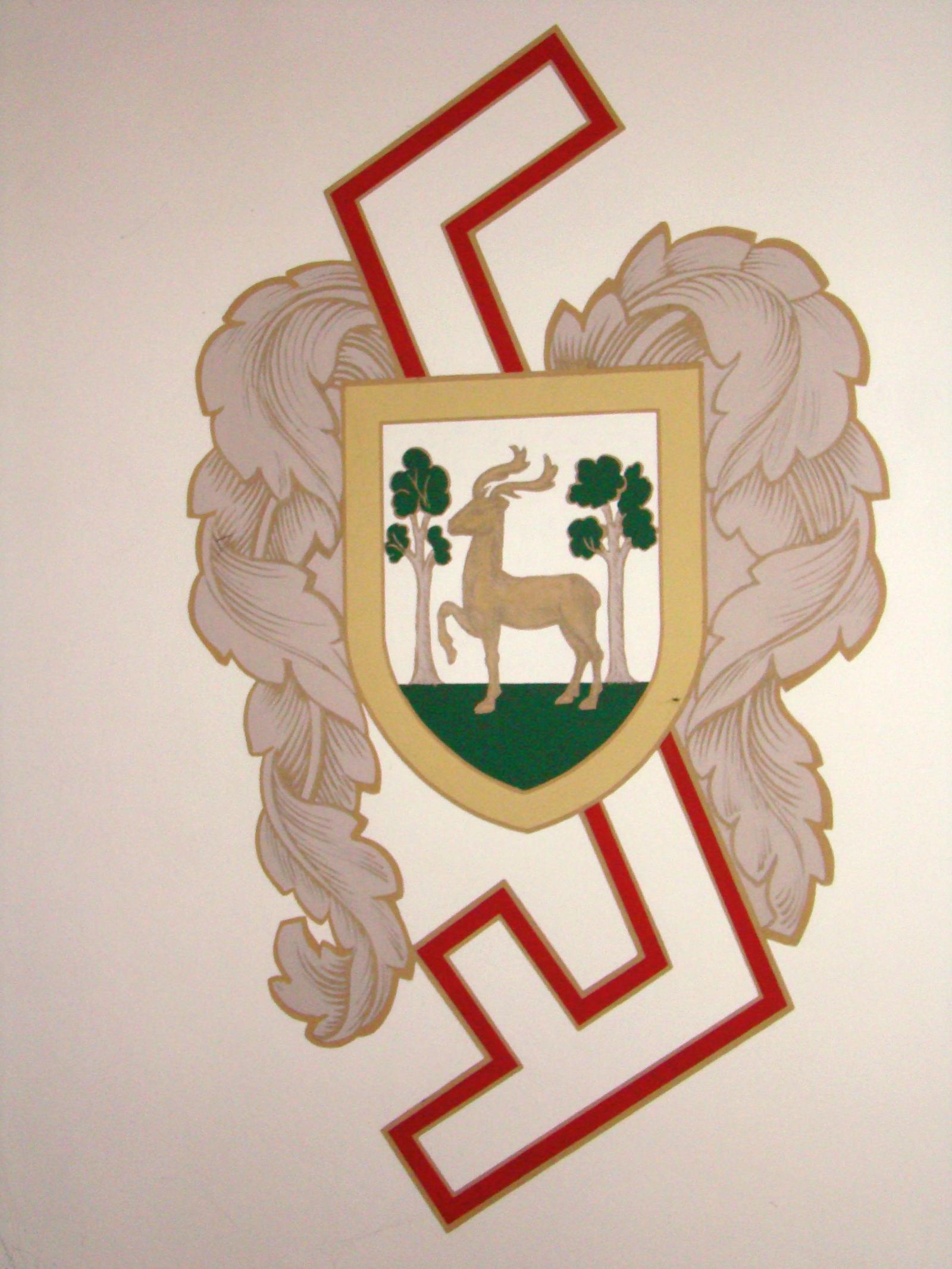 II. Next, we head north (46 m) to reach the early-Baroque parish church of the Assumption of the Blessed Virgin Mary. This time the town insignia cannot to be found outdoors, but rather is located inside the church - on the ceiling under the choir stalls. The church ceilings and walls are decorated with frescos and sgraffito from 1964 - 1966 by Anna and Leonard Torwirt, both Vilnius-born artists. The town emblem was placed on the Rodło emblem, which presents the course of the Vistula river with the location of Cracow marked on it. It has been used by the Union of Poles in Germany since 1933 until today. On both sides, the insignia is crowned with decorative cartouches with patriotic and regional motifs. 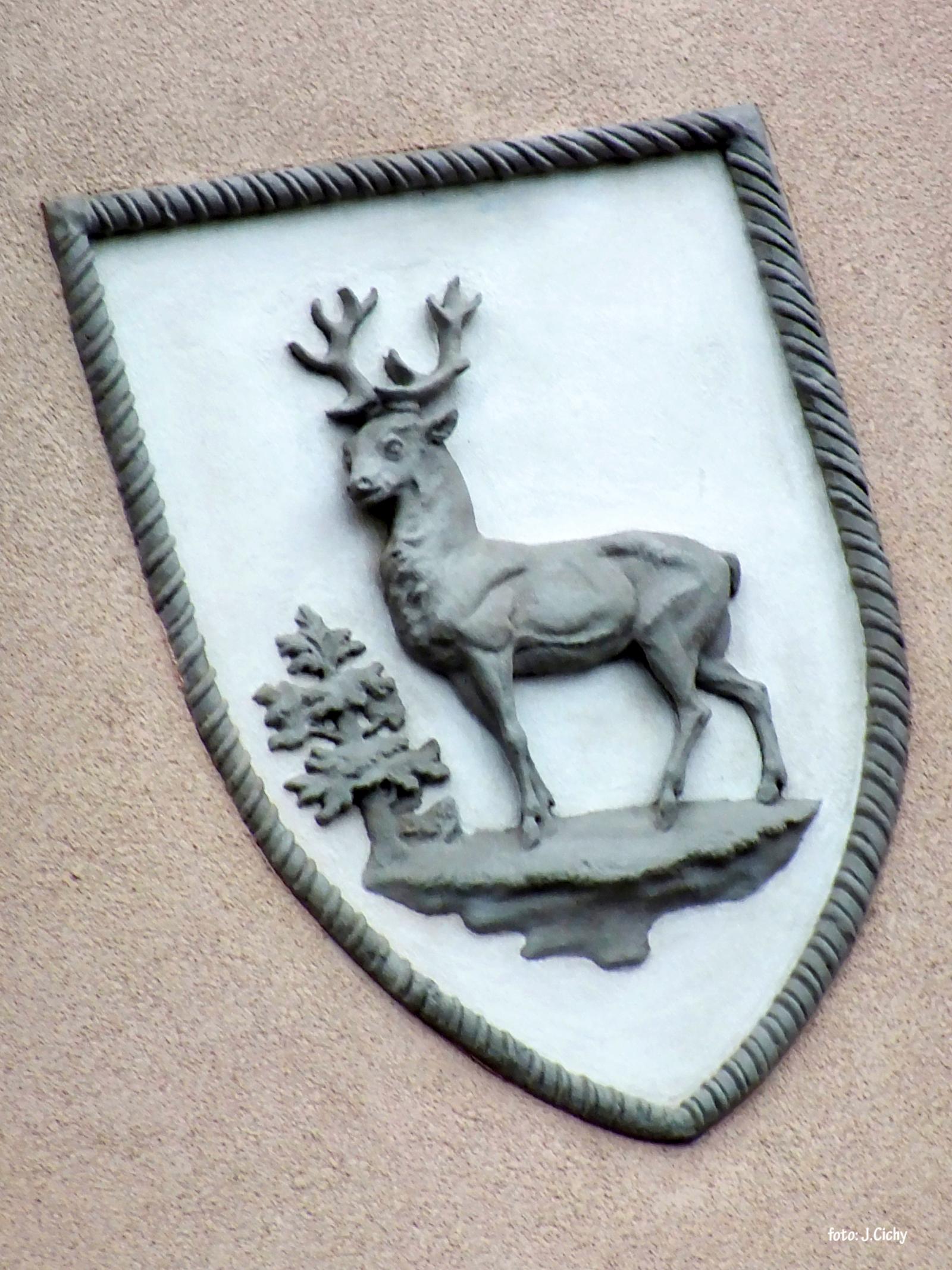 III. Our next route should only take us about 6 minutes (it’s only 500 meters). Let’s head back to St. Stanisław Kostka Church, passing it on the left side. Staying on the Kościuszko Square, we’ll discover another town insignia. You will probably have to squint really hard or use binoculars because it is located in a very high place on the former court building, presently a Detention Center. Because it is found in the neighborhood of a church, the town authorities placed it in the so called “heraldic slope”. The brawny stag standing next to a small, branching tree was made out of sandstone. The court building was built in 1865 - 1866 in the neo-Gothic style.

86 meters past the Detention Center, we turn right into Obrońców Warszawy Street. It features very interesting street architecture with 19=century gabled roofs. The street ends at Harcerzy Złotowszczyzny roundabout. Right next to it, on the right side, there is a neo-Gothic St. Roch’s Church from 1903. In the direct vicinity of the church there are disused cemeteries: Catholic, Evangelical and war cemetery. A wonderfully sentimental place, but we need to move on to find the next town insignia.

We head east, going down Mickiewicza Street on the roundabout. Near Wolności Square there is a monument of Adam Mickiewicz. It was built in 1951 at the initiative of a school teacher, Mrs. Anna Borkowa, based on a German, pre-war, granite plinth. 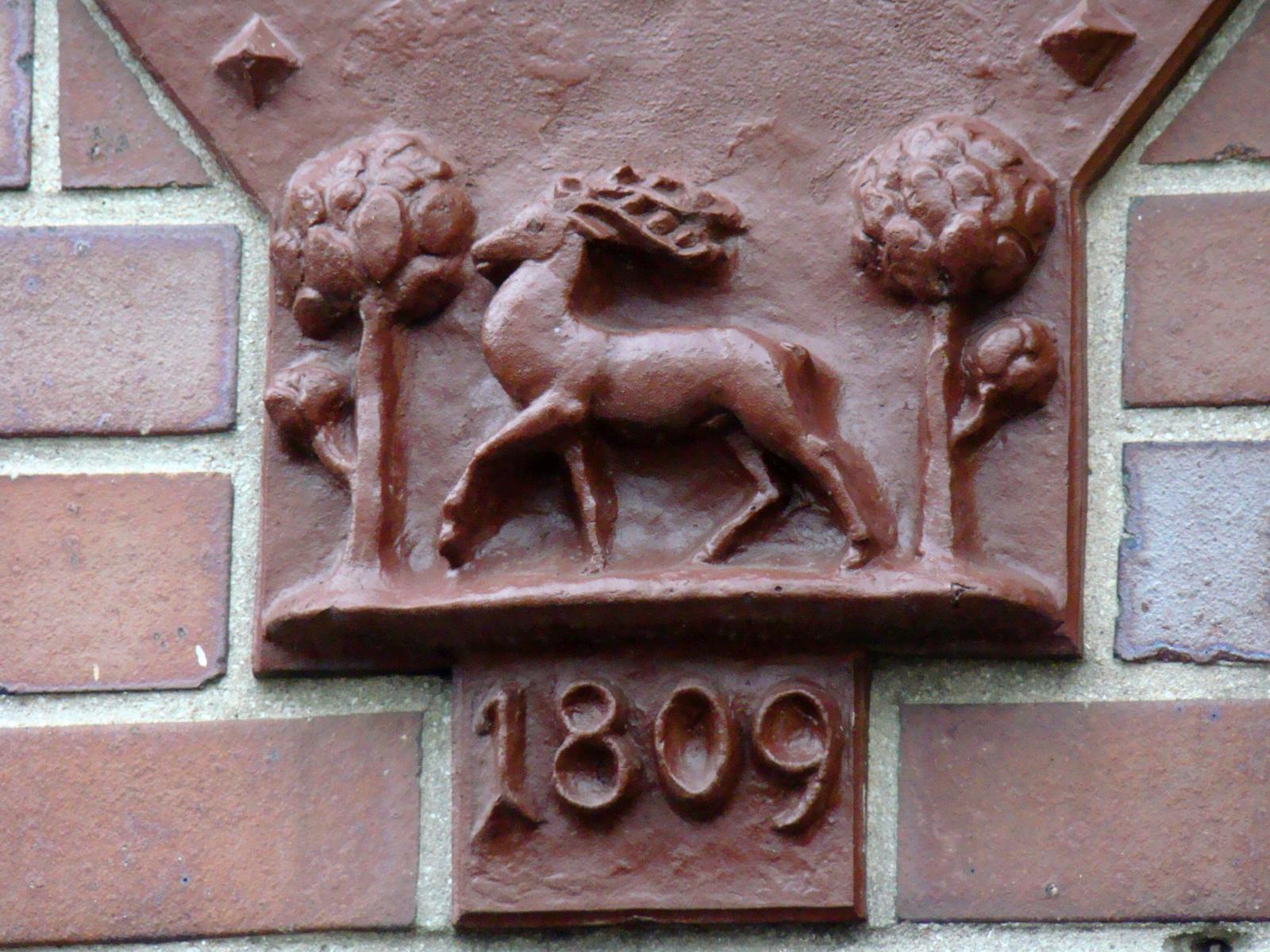 IV. We bid our farewells to the national poet and turn right towards the Economic School Complex to find the next town insignia. The oldest part of the building was built at the end of the 19th century. In 1809, the Złotów town insignia was placed near the entrance to the building. A similar one was present on the now-gone signpost near the present Jastrowska Street. Originally,, the building complex housed different German schools, until 1948, there was a junior high school and a senior high school, both of which were the origin of the present-day 1st M. Skłodowska-Curie High School.  After the liberation of Złotów, the people yearned for education and, until 1969, the graduates of the High School of Pedagogy would staff the nearby primary schools. The High School of Pedagogy was converted into the Economic School Complex in 2002. Three years later, the district council named the school after John Paul II. 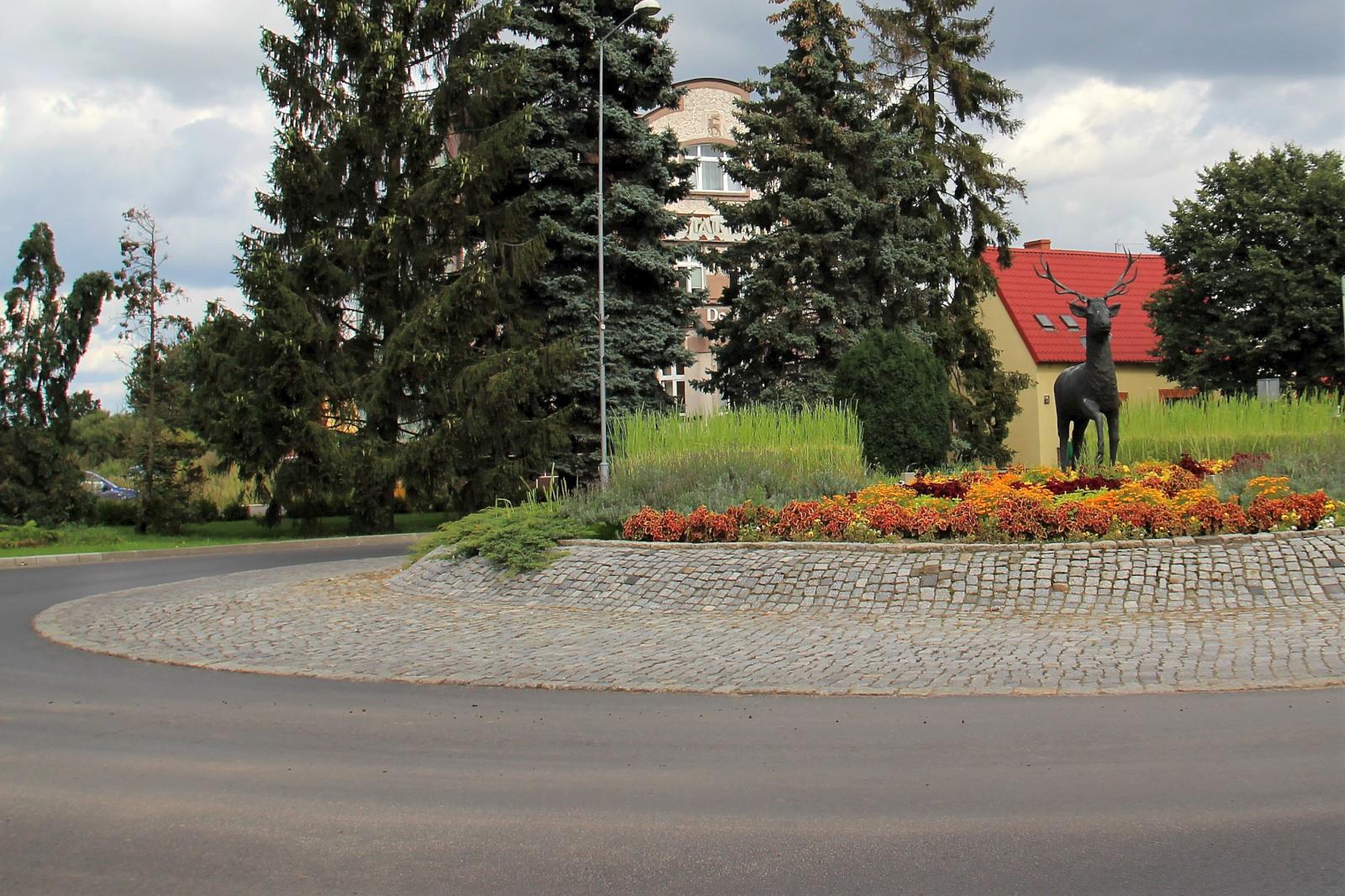 Moving back on our trail, we follow Mickiewicza Street. The passage (400 m) takes us about 5 minutes and takes us through 31st Stycznia Square to a roundabout with the town insignia stag monument, cast in bronze in 1993. Before the war, a pair of stags were placed near the Działyński Palace, a monument was later built near Dom Polski. Every day at noon, after the town bugle-call and the hunter’s call sounds, the stag rotates on its axis with chiming bell sounds in the background. 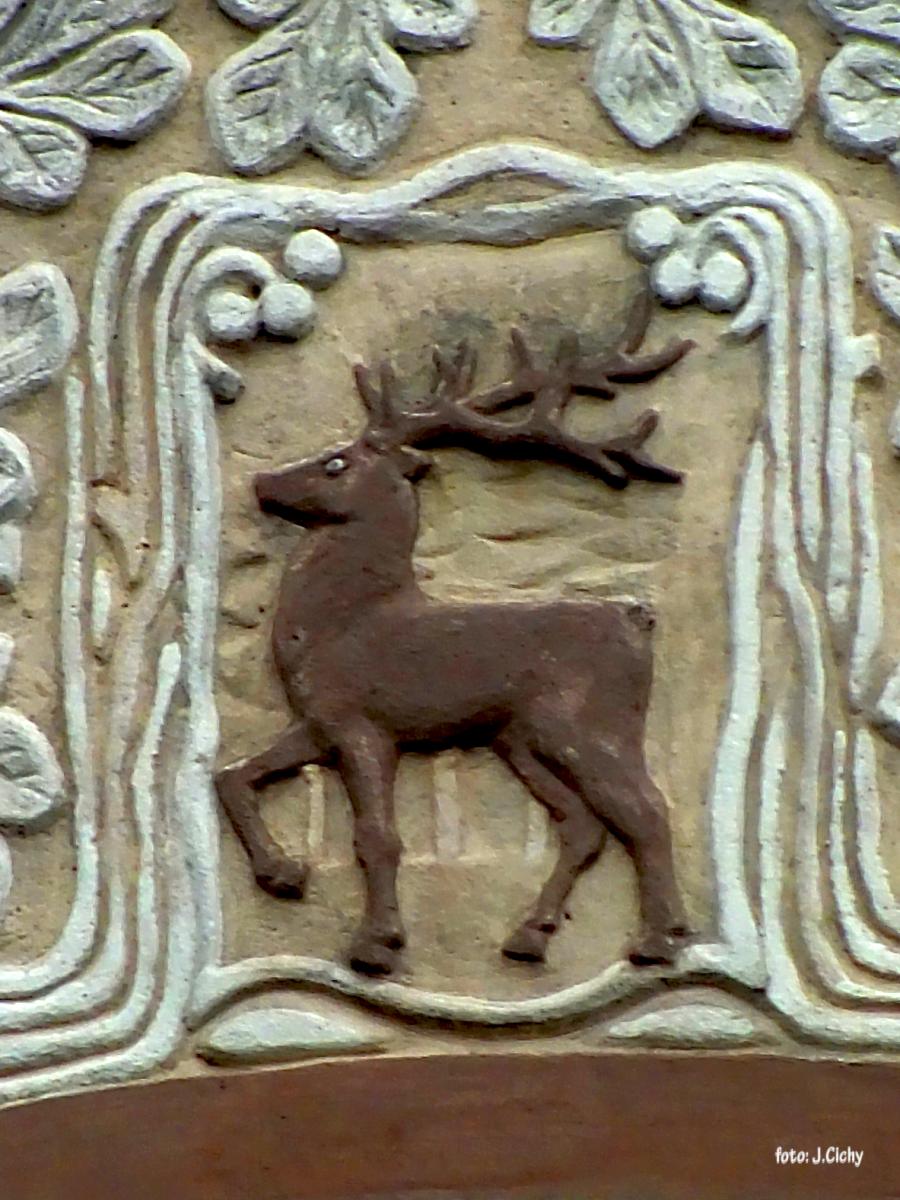 V. Once we move past the roundabout, the next destination is on the left. Dom Polski (Polish House), built in 1905 on Domańskiego Street, is a historic Art Noveau tenement building. The building features unique, extrusive facade decorations. In order to find the town insignia we must look up at the front of the building. The stag can be seen among the intertwining trunks and chestnut leaves. It is one of the more interesting images from the town postcard snapshot. In 1935–1939, the building housed the seat of District V of the Union of Poles in Germany and other institutions of Polish culture operating at that time including; the Head Office of the Polish Catholic School Society for the Piła administrative region, the Polish School Inspectorate, the Directory of Polish Youth Associations and  a branch office of ”Głos Pogranicza i Kaszub” newspaper. The patriotic activities in this place were commemorated with a plaque.

VI. Heading out from Dom Polski, we go south-west (9 m) and take a gentle turn left, making sure to stay on Domańskiego Street. We move right along (30 m) and cross the roundabout into Piast Avenue. On the left, there is the Town Hall with the Złotów insignia. 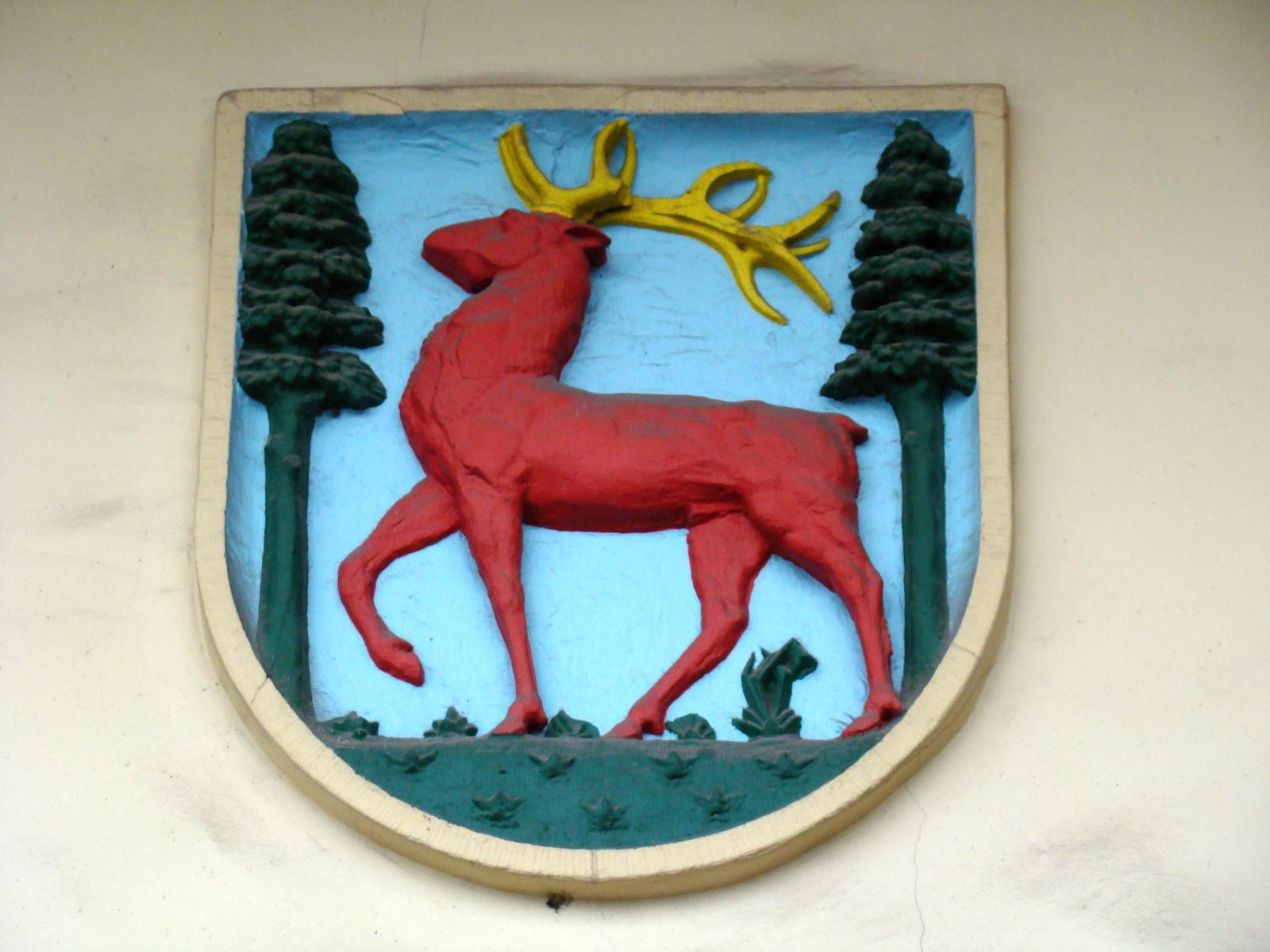 Above the main entrance, there is a polychrome low-relief of a stag between two trees. The seat of the town authorities near Piast Avenue was built in 1913 and was designed by the resident town architect at that time - Adolf Behr. What used to be the most beautiful room in the town hall was the meeting hall with four, large arched stained glass windows. At the center of the first stained glass window, in a garland frame and with antlers filled with fruit, birds and jewels, stands the town insignia animal: the red stag, between green, deciduous trees in a silver field. The window was sponsored by the town magistrate. The building is crowned with a turret and a banner with the town insignia motif. Presently, the town bugle call sounds every day at noon from the turret. 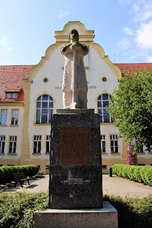 VII. The hike from the Town Hall to the Piast roundabout (500 m) should take us about 7 minutes. This time we cross the roundabout to our destination - the District Governor’s Office, on the right. In front of the Office, there is the only monument of king Piast Kołodziej in Poland, from 1957.

The monumental neo-Renaissance building was erected in 1910–1912 as a seat for the district authorities. It houses a collection of unique, historic Art Noveau stained glass pieces, three of which are considered particularly valuable and were placed in the windows of the district council auditorium.

VIII. The 1,44 ha Town Park is located near the District Governor’s Office; it features an interesting, historic forest stand. There, we will try to find the next city insignia which is inscribed in the fountain. The monument to song and music honors four music ensembles from Złotów: St. Cecilia’s Choir, the Teachers’ Choir, the Primary Music School and the Złotów Voluntary Fire Service Brass Band. In 2014, the St. Cecilia’s Choir celebrated its 130th anniversary (it was established in 1884). 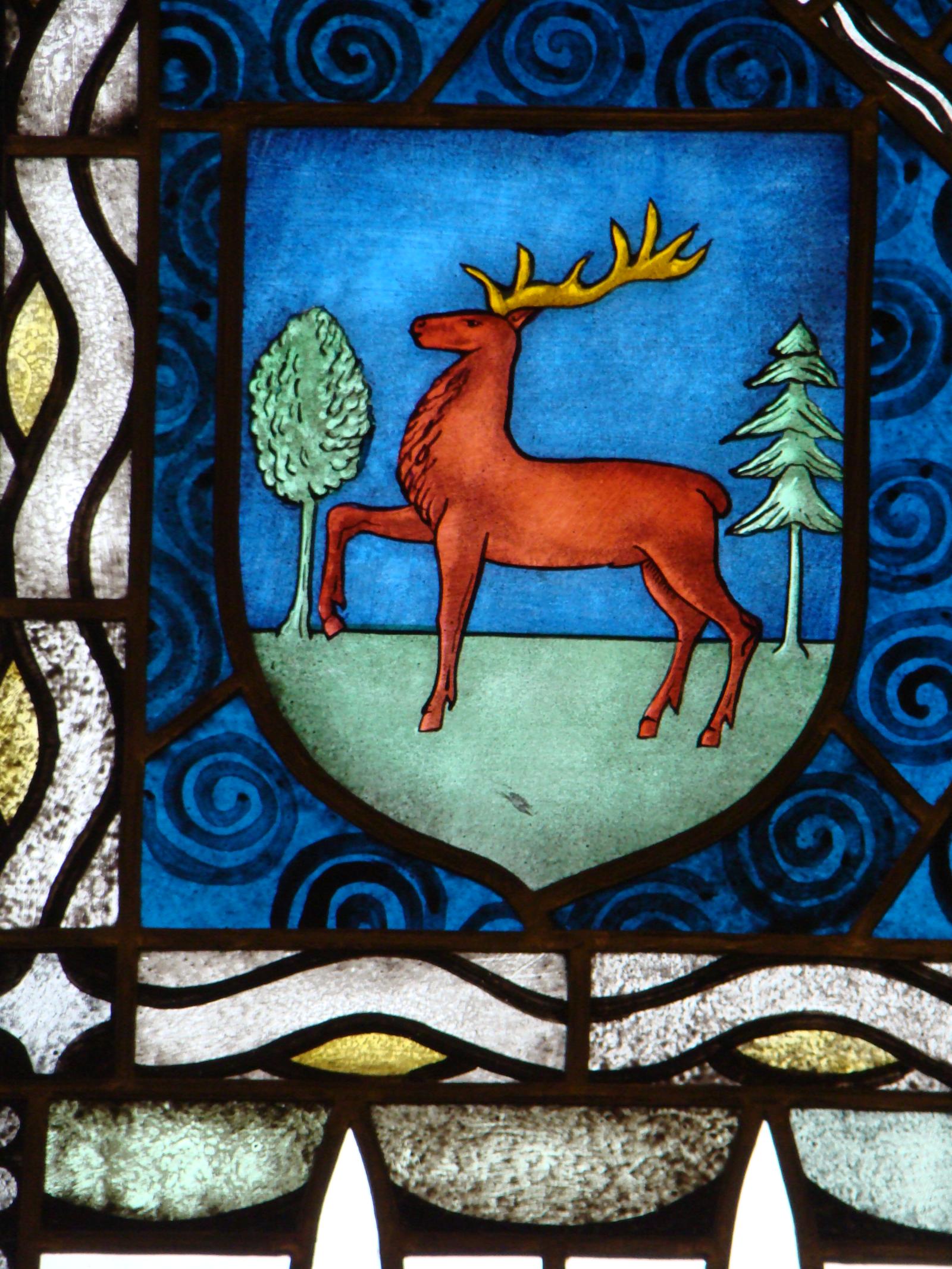 IX. The sound of music leads us along Piast Avenue to the west, passing Bolesława Krzywoustego Street (71 m). Near the Piast roundabout, we find the current Tax Office building and a real pearl - in the mezzanine floor window there is a stained glass window from 1945. It shows the town insignia in an excellent style, which we already know from Brandt’s publications; The mayor of Złotów in the interwar period – Carl Friedrich Brandt – was the author of articles and books on Złotów, he designed the first printed map of Złotów and a wall map of the Złotów district. 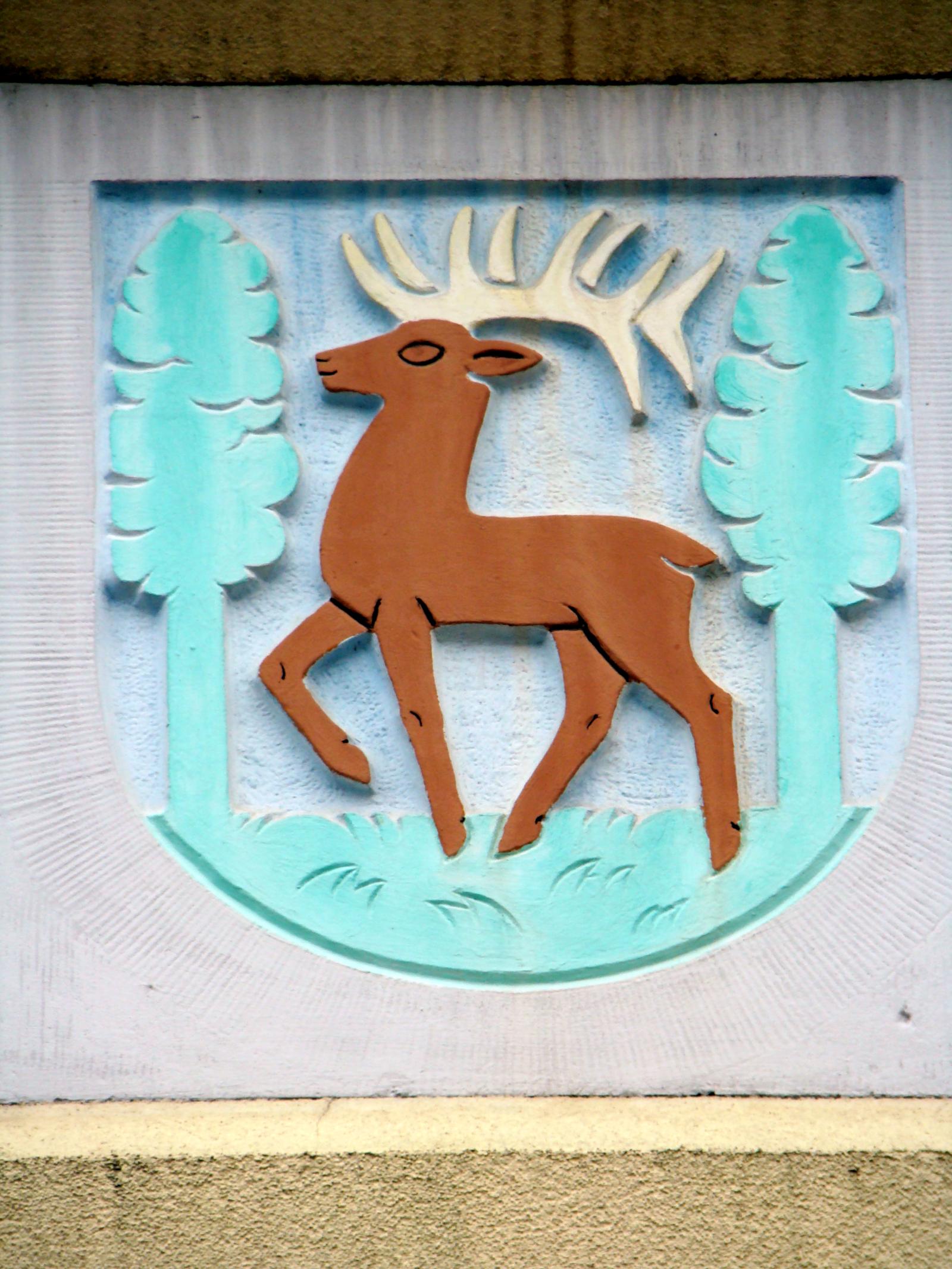 X. We take a five-minute stroll (300 m) along Norwida Street and turn right before the roundabout into Bohaterów Westerplatte Street. On this street, near John Paul II roundabout, on the right-hand side, we find the previously mentioned Maria Skłodowska Curie High School. The town insignia on this building comes from the interwar period. It is amazing that the synthetic relief design placed at floor level of the top wall has kept its colors. The history of the present-day school begins after 1945 when university graduates from Lviv, Vilnius and Berlin came to Złotów from all parts of pre-war Poland. These professors set the direction for the school’s development and maintained the high level of education. 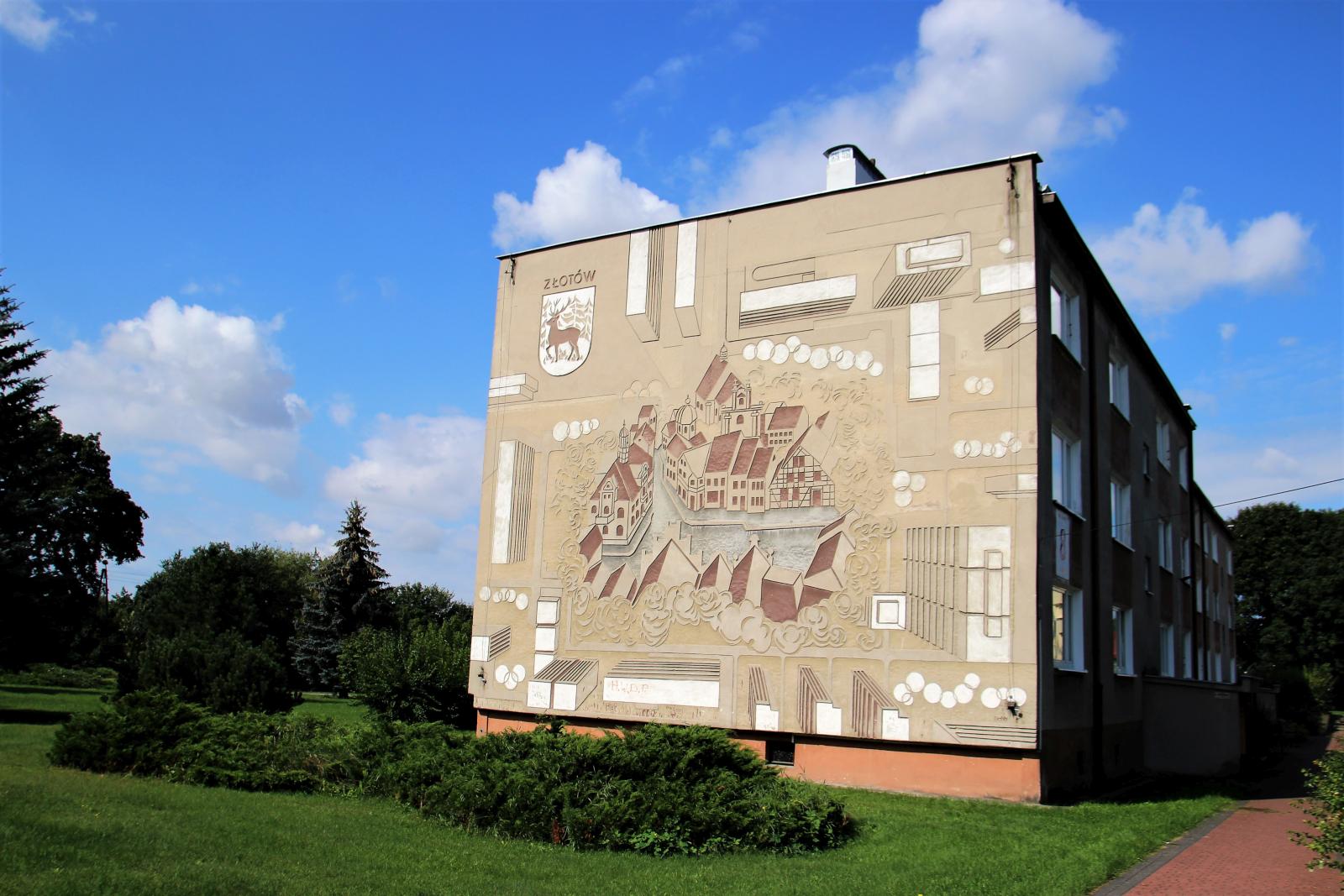 XI. We retrace our steps through Bohaterów Westerplatte Street to the west from the roundabout and turn into Norwida Street. As we approach the Sybiraków roundabout, we move towards the lake. To the left, we pass a point of interest - the District Hospital from the year 1913. After a 10 minute walk (700 m), we reach our destination at Boczna Street where there is a beautiful view of the Miejskie Lake. Until 2017, there was an image of the Złotów town insignia on the building wall - a stag strutting on a forest background incorporated into the town panorama. The mural was made in the sgraffito technique, which was popular in our Town.

To end our journey, we suggest taking a stroll along the Złotów promenade with its beautiful view over the Miejskie lake. It is a major attraction for strollers, joggers and fans of cycling not just by daylight, but also after dark, as the route is very well lit. We will try to find the next town insignia stag along the way - we know it’s next to the sundial. The promenade leads us to the Półwysep Rybacki peninsula to the open air museum - Zagroda Krajeńska. A viewing platform was built on the western bank which allows a view to the Old Town. Maybe the legendary Złotów stag will emerge from the nearby game park...

Prepared by the Złotów Land Museum: 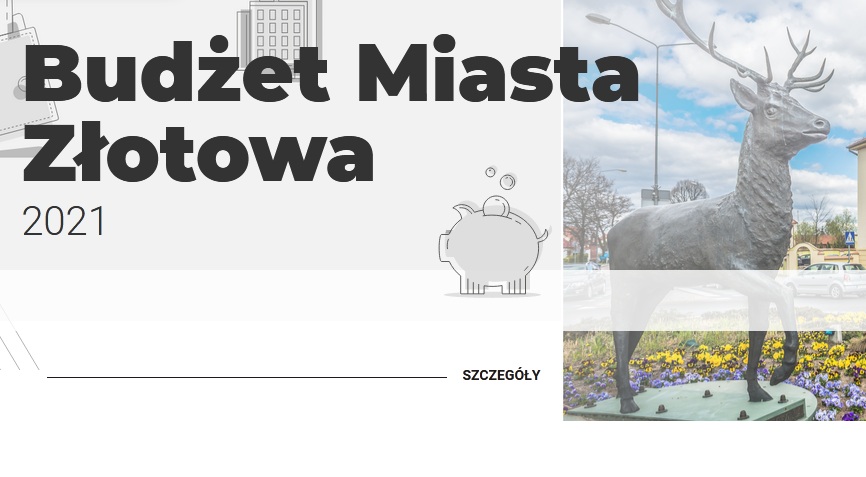